About That Engraving By William Kneass . . .

In my August 2012 post to My Sentimental Library blog, "Grammars, Spellers, and Writing Guides," I made particular mention of an engraving by William Kneass in the 1806 First American Edition of Epea pteroenta; or, The Diversions of Purley by John Horne Tooke:

Of note is the frontispiece of the first volume, an illustration of prepositions. It was engraved by William Kneass (1781-1840), who later became the Chief Engraver of the United States Mint, a position he held from 1824 until his death in 1840. 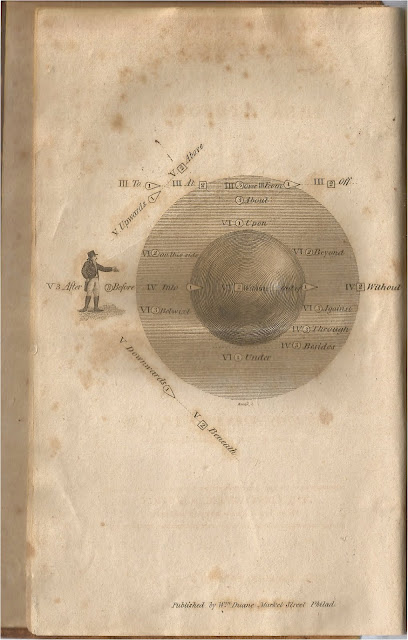 William Kneass impressed me with the design of his engraving. He pictorially defined the prepositions in a brilliant diagram. Here's an expanded view, with his last name and the abbreviation "sc," printed immediately below the circle. "Sc" stands for "sculptsit" or "sculpserunt." In layman's terms, the words mean "engraved by." 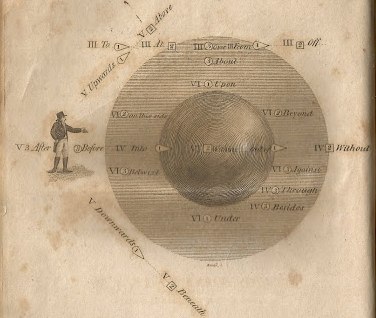 In researching Kneass, I learned that numismatists at uspatterns.com "are of the opinion that there is not a single United States pattern coin design that can be attributed to Kneass."

To me, this made Kneass's engraving in The Diversions of Purley even more noteworthy.

Just a few days after uploading my August blog post, I began researching for my September blog post. "Eloquent Words, Written and Spoken," I thought, would be the title for my September post. And the following engraving looked inviting as an Intro: 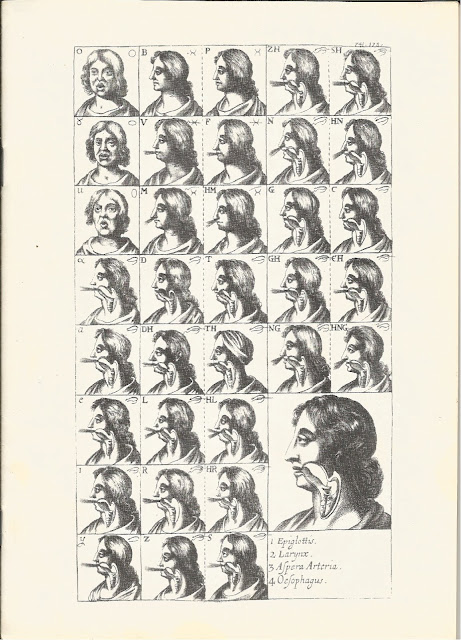 The engraving is the front cover of a bookseller catalogue from the late 1980s. 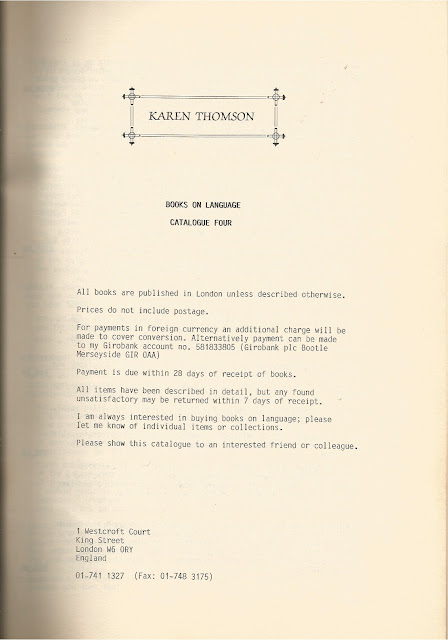 You will read more about Karen Thomson's catalogues of Books on Language in my October post to My Sentimental Library blog. I have over sixty of her catalogues.

Here is Karen Thomson's listing of the 1668 book that contained the engraving I was interested in: 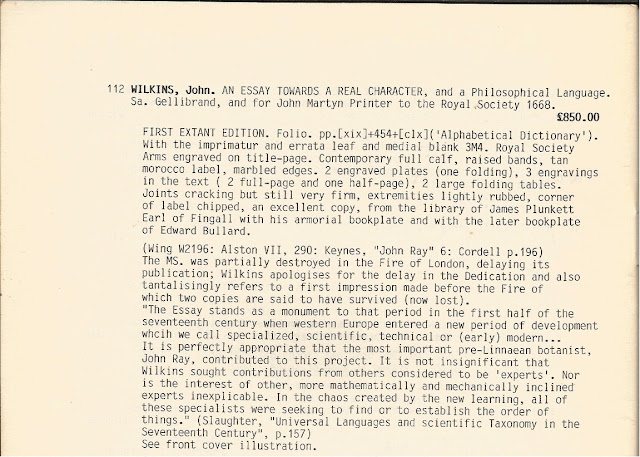 The engraving appeared to illustrate how vowels and consonants were spoken. But I wanted to know more so I viewed Wilkin's work online via Early English Books Online (EEBO).   Rather interesting, it is. Wilkins was attempting to make English the universal language, replacing Latin. 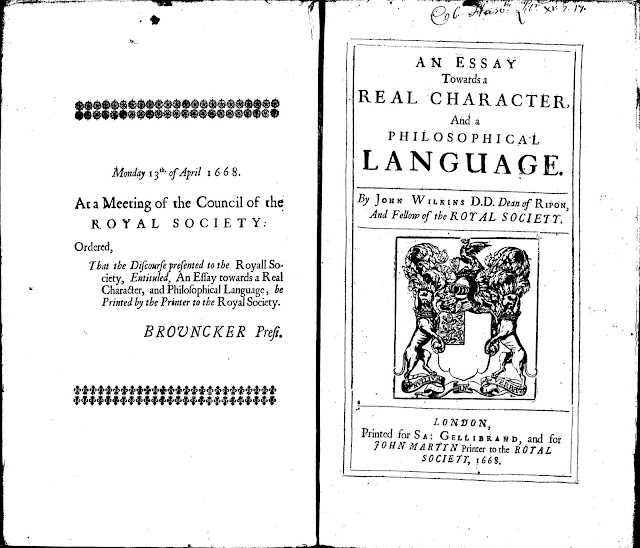 I browsed the thumbnails on EEBO, and quickly found the illustration I was looking for: 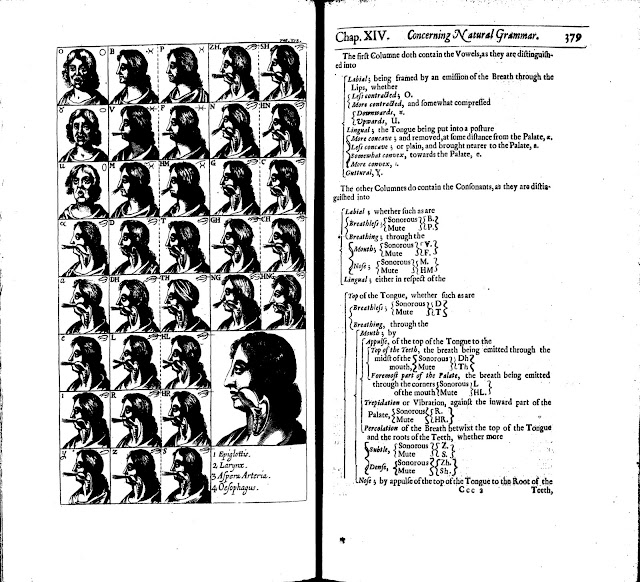 And in the same chapter on natural grammar I found this engraving as well: 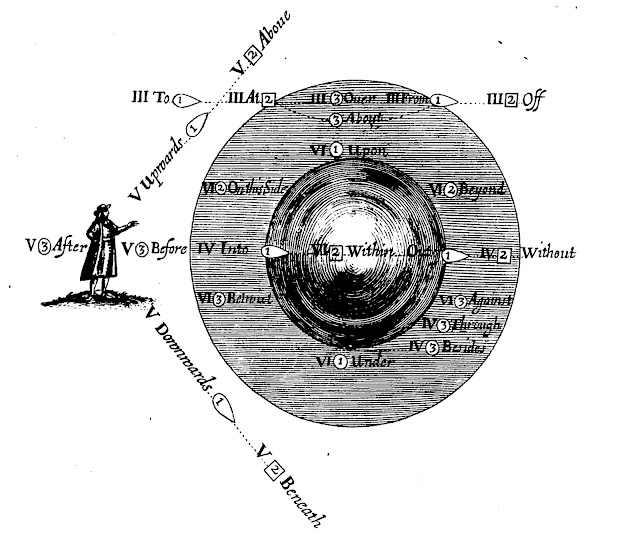 So much for Kneass designing the engraving in The Diversions of Purley! I don't know what they call it in engraving circles, but in writing circles we call it plagiarism. Granted, Kneass changed the man's clothes and even had the man's hand pointing straight instead of up, but everything else in the diagram is the same.

The 1668 engraving is not signed, but John Wilkins was an engraver, and may have designed and engraved this illustration himself. 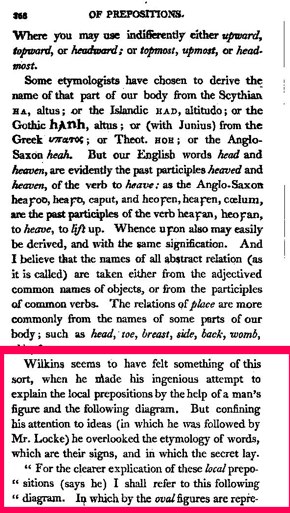 I research further and, sure enough, in the London editions, Wilkins's diagram is located in the chapter on prepositions: 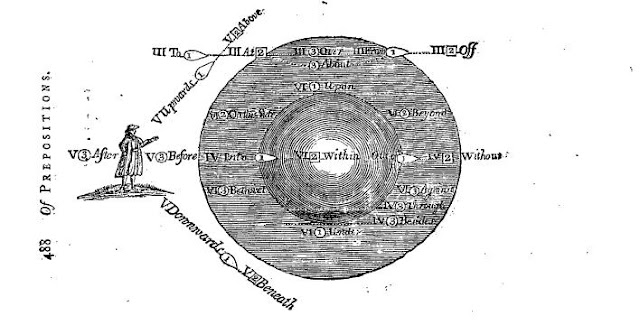 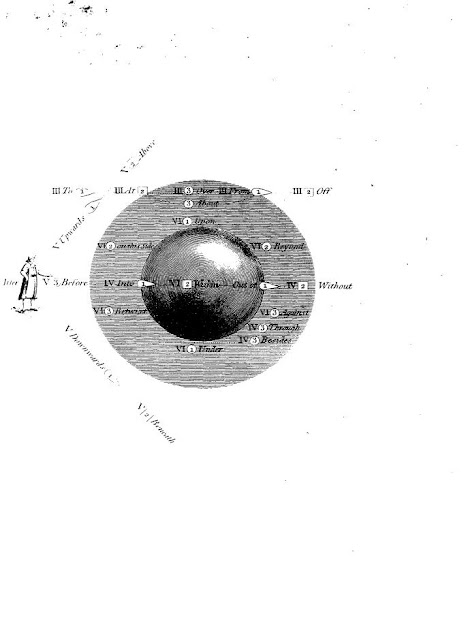 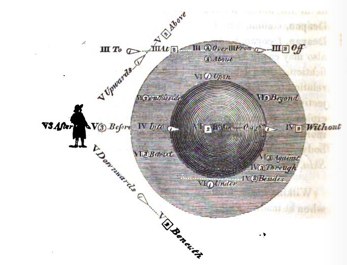 It gets worse, people.

Where there's smoke, there's fire, so I began to wonder if there was a little hanky panky going on with the frontispiece for Vol 2 of the First American Edition of The Diversions of Purley as well. William Kneass was also the engraver of the frontispiece of this volume, showing Mercury putting on his winged sandals. Kneass signed this engraving "W Kneass sc." 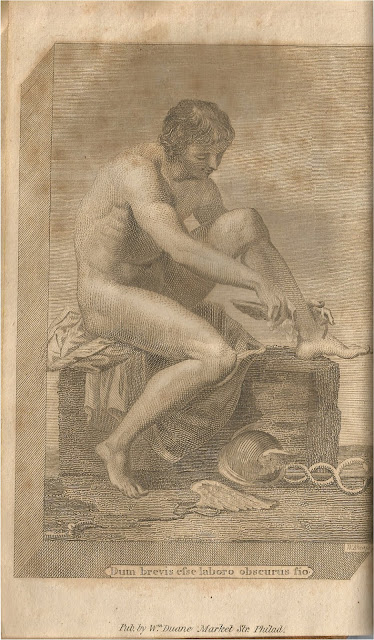 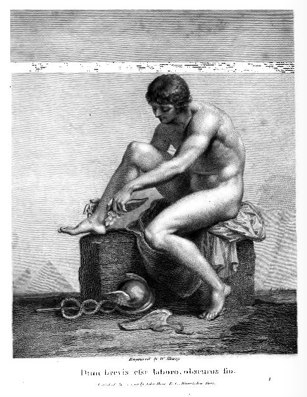 Kneass merely reversed the engraving, and had Mercury putting the winged sandal on his left foot instead of his right foot. Clever eh? Not.

I should mention the following information concerning William Sharp which appeared in the Annual Biography and Obituary for the Year 1825:"He engraved the figure of Mercury putting on his sandal wings after a model or drawing by Banks for The Diversions of Purley (P225)."

Banks would be Thomas Banks (1735-1805),Britain's first modern sculptor. I could find no recorded sculpture of Mercury putting on sandals by Banks. It may have been one of the models or drawings he created while still a student. At any rate, in regards to Sharp's engraving, I am pleased with the phrase "after a model or drawing by Banks." Too bad William Kneass didn't use such a phrase.