Researching Serving You ... And its Catalog Records 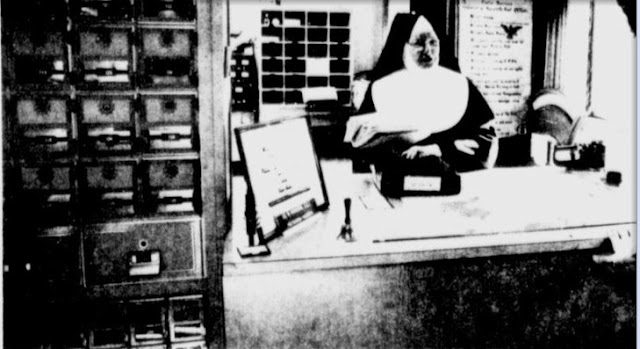 Yes.  That is, in fact, a nun on the postal side of the counter in a post office. She is Sister Marciana, SSJ, and she was the postmaster of the Nazareth, Michigan Post Office. This picture appeared in newspapers around the country in 1974. But this blog post is not specifically about Sister Marciana; it is about the book she edited: Serving You 1802-1976: Post Offices of Michigan. 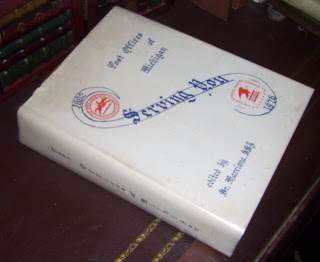 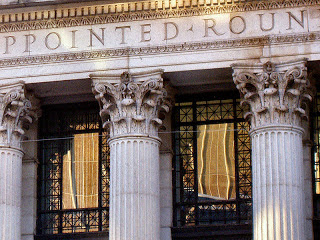 In July 1975, the President of the National Association of Postmasters, Michigan Chapter, appointed Sister Marciana, SSJ, Postmaster, Nazareth, Michigan to gather and edit a history of all of the post offices of the state of Michigan "serving the people of the world in 1976." The book was to be the contribution of the Postmasters of Michigan for the Bicentennial Year.

Together with Ruth M. Reed, Postmaster of Cloverdale, Michigan, Sister Marciana traveled to the General Services Administration in Washington, D.C., combed the micro-films of the General Archives—now called the National Archives—and gathered the names of Michigan Postmasters from the early 1800s on.

When she finally finished gathering, compiling, and editing the mounds of postal information, her book contained 995 pages.

To her book, Sister Marciana added a Dedication Page: 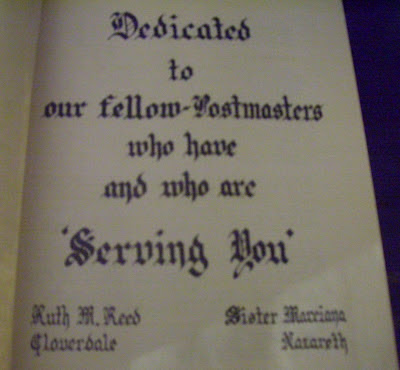 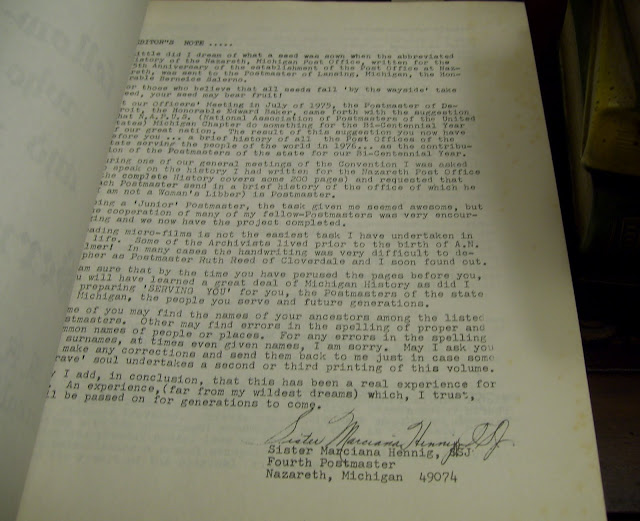 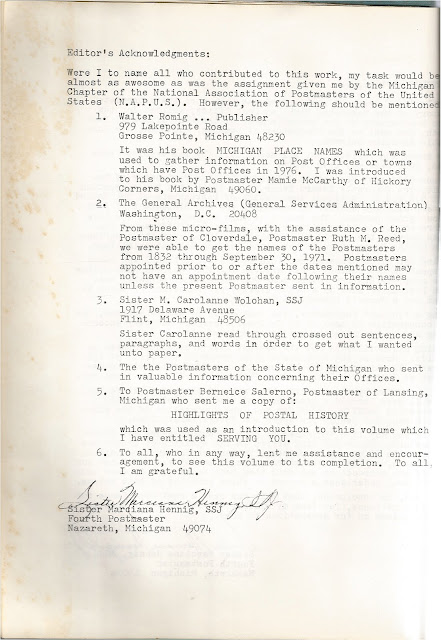 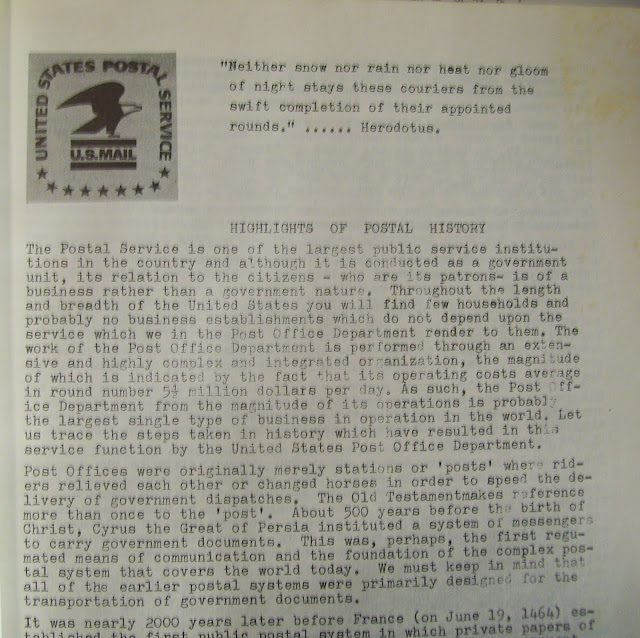 But one page Sister Marciana did not add was a Title Page!

The Smithsonian Libraries catalog record of the copy in the National Postal Museum: 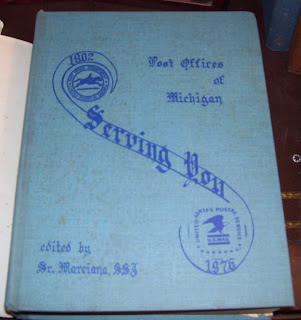 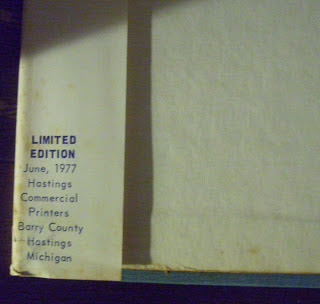 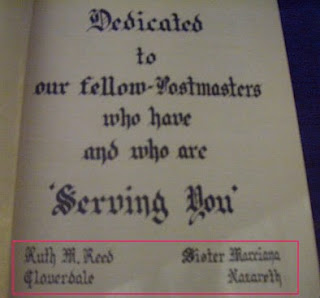 The name of the publisher and the place of publication in the LOC catalog record are not accurate. The book was self-published; Walter Romig (1903-1977) was not the publisher. A closer look at the Editor's Acknowledgments Page reveals that Sister Marciana was merely acknowledging that she used Walter Romig's book, Michigan Place Names, to help identify the post offices of Michigan. She inserted Walter Romig's offical title of publisher and his address after his name purely as a means of formal identification. She did the same for the others listed on the Editor's Acknowledgements Page. As for Walter Romig, he was an author himself and a publisher of numerous books, all of which have title pages. If Walter Romig were the publisher of Sister Marciana's book, don't you think he would have included a title page?

The name of the author, and probable date of publication in the Smithsonian Libraries catalog record are not accurate. The cataloger should have obtained the name of the author from the cover as well, instead of from the Dedication Page. The cover clearly states, "edited by Sr. Marciana, SSJ." Ruth M. Reed's name is not listed on the cover. Nor is Ruth M. Reed one of the signatories of either the Editor's Note Page or the Editor's Acknowledgments Page.  The former page begins with the words, "Little did I dream," and the latter page begins with the words, "Were I to name all." If Ruth M. Reed were one of the editors, the word "we" would have replaced the word "I."  Ruth M. Reed's only stated contribution to the book was helping Sister Marciana research the names of former postmasters in the National Archives, a contribution which  Sister Marciana mentions in the Editor's Note Page.

The date of publication is incorrectly listed as 1976. I queried the Smithsonian Libaries, asking if its copy included the dust jacket.  Baasil Wilder, Reference Librarian, History and Culture Department, Research Services Division, Smithsonian Libraries,  verified that the Smithsonian Libraries copy, which the library received in 1980, lacks the dust jacket.  The lack of the dust jacket deprived the cataloger of the source for the printing statement: "LIMITED EDITION, June 1977 Hastings Commercial Printers Barry County Hastings Michigan."  Since the book was "a bicentennial project," the cataloger probably figured the book was published in 1976. A little later, I will show that dated entries in the book make it unlikely that the book was published in 1976. 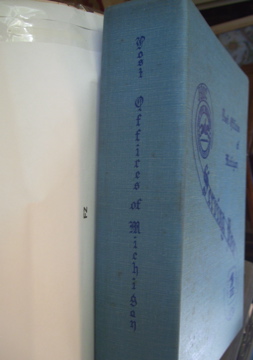 And just to muddy up the waters a bit more, here is a little tidbit straight out of the horse's mouth, so to speak—Sister Marciana's mouth. Although she did not add a title page to her book, she did tell us the title of her book. On Page 795, in the history of the post office in Romeo, Mi., Sister Marciana wrote:

"Post Offices Serving All the People of Michigan." Chime in librarians, please! Should Sister Marcians's own title be the title that is recorded in the catalog record of her book?

There are at least thirteen other libraries who have copies of Sister Marciana's book, all but one of which I identified via WorldCat. 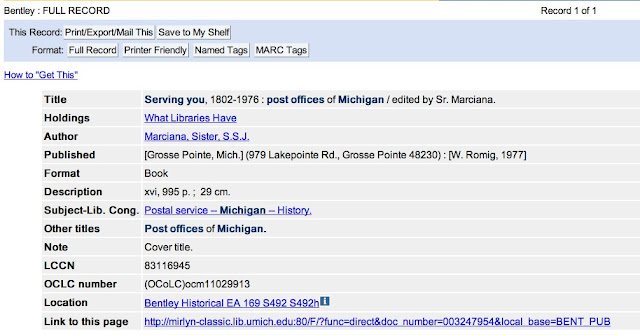 The University of Texas at Dallas Library catalog record: 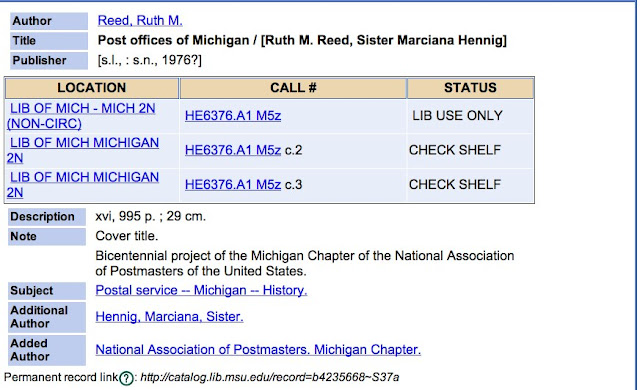 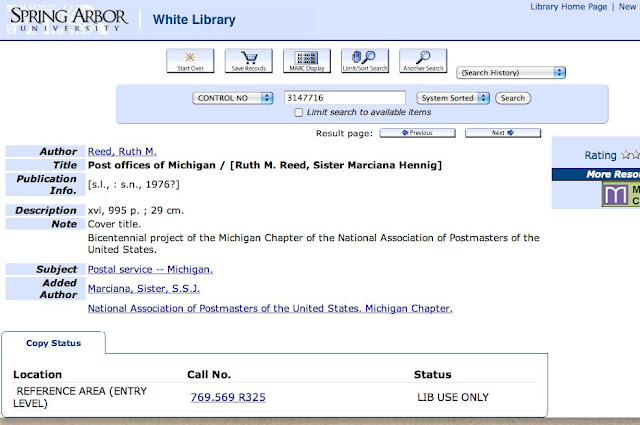 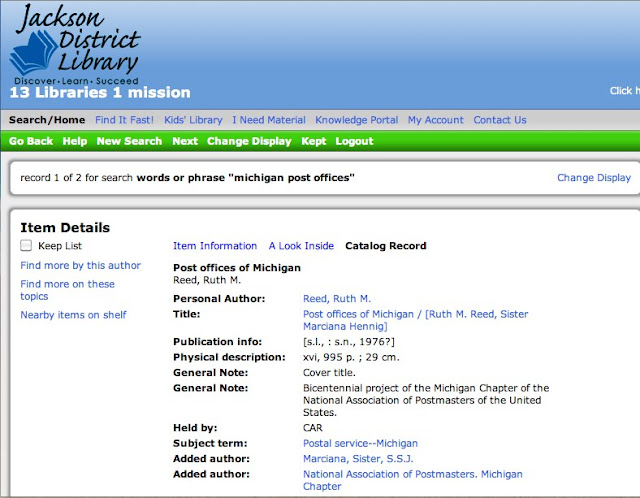 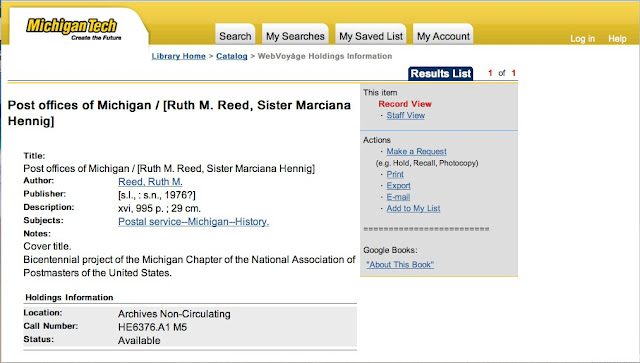 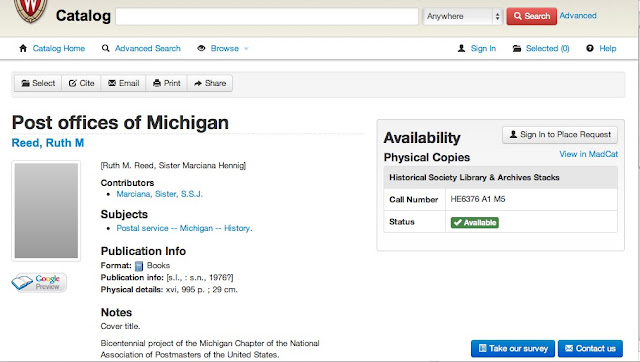 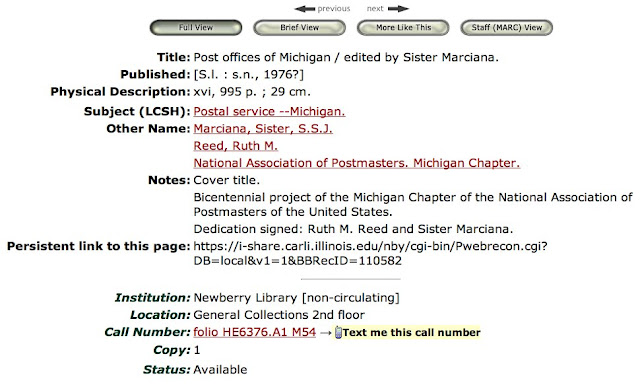 The catalog record of another library is similar to the Smithsonian Libraries catalog record, but with a variation of the title, one that is close to Sister Marciana's stated title: 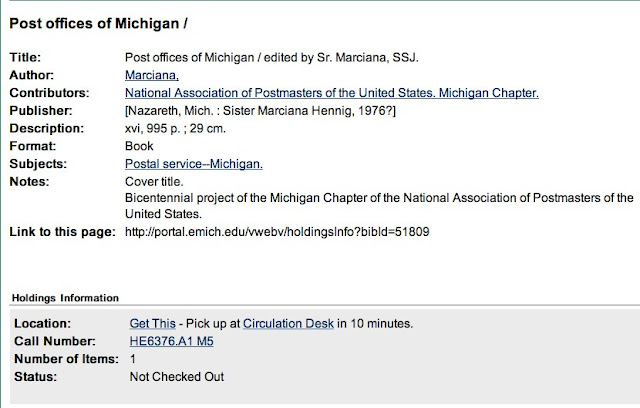 I queried the Eastern Michigan University Library, asking if its copy had the dust jacket. Keith Stanger, Information Services Librarian, responded that the EMU copy was lacking its dust jacket.

There is yet another catalog record, one that is not listed on WorldCat. I found it first via the Van Buren Regional Genealogical Society's Ancestry.com's pages. Scroll down about four pages and you will see this listing: 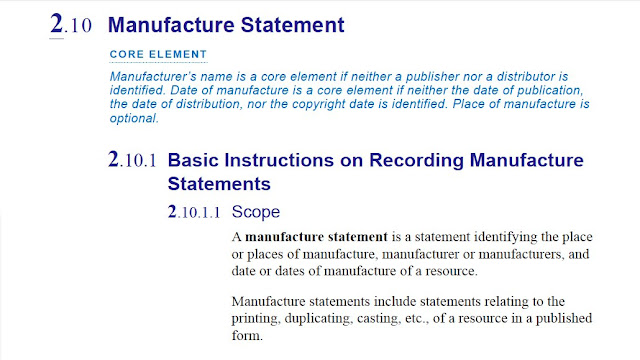 The only thing I would change with the Van Buren catalog record is its title, "Serving You; Post Offices of Michigan." I believe the dates 1802-1976 should be included in the title because the book was a special project for 1976, the bicentennial year. Moreover, it contains the histories of the post offices of Michigan from 1802 to 1976.


The Postmaster of the Winn, Mi. Post Office submitted this last entry no sooner than June 21, 1976 and no later than August 26, 1976. The latest recorded dated entry in the entire book is July 3, 1976. If Sister Marciana's book were published in 1976, this effectively gives her less than six months to complete the compiling and editing of her book, not to mention how much time Hastings Commercial Printers would need to print it.

I should also note that there are two copies of this book listed on AbeBooks, but with different titles and different dates of publication. One of them, Post Offices of Michigan; Serving You, 1802 - 1976, is a stated Limited Edition, and has a date of publication of 1977. This copy has the dust jacket. The other copy, Serving You, 1802-1976: Post Offices of Michigan, Dedicated to Our Fellow Postmasters Who Have And Who Are "Serving You," is reportedly a first edition, first printing, and has a date of publication of 1976; however, the listing does not mention that the dust jacket is present. This copy has a presentation inscription from the author. The inscription, however, is dated 1977, which should send up red flares!

In bold capital letters in the printing statement, or soon-to-be-called manufacture statement, on the front flap of the dust jacket are the words, LIMITED EDITION, which to me means there was only one edition, and only one printing. If there were 1976 and 1977 printings, I'm sure the 1977 printing would have said, "second printing," instead of "Limited Edition." But to rule out the implausible, I queried Toni I. Benson, Local History Librarian, Van Buren District Library, Decatur, MI, and asked her to verify the date of printing on the dust jacket of her copy. The date on her copy is June 1977 as well. Btw, kudos for the Van Buren District Library's page, vbdl.org. Lots of information. I particularly liked the Election Information.

Finally, this is how I have my copy cataloged on Library Thing: 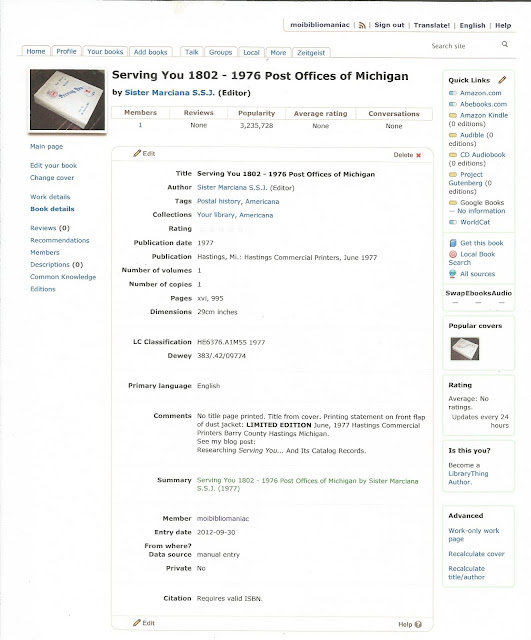 How would you catalog the book?