Researching the Value of Outlines of the Life of Shakespeare 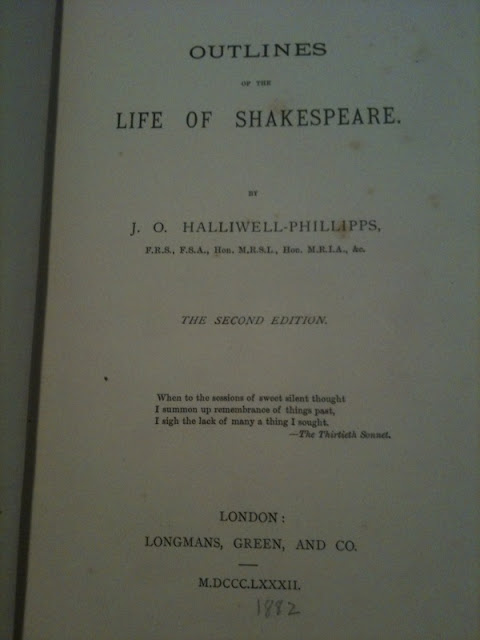 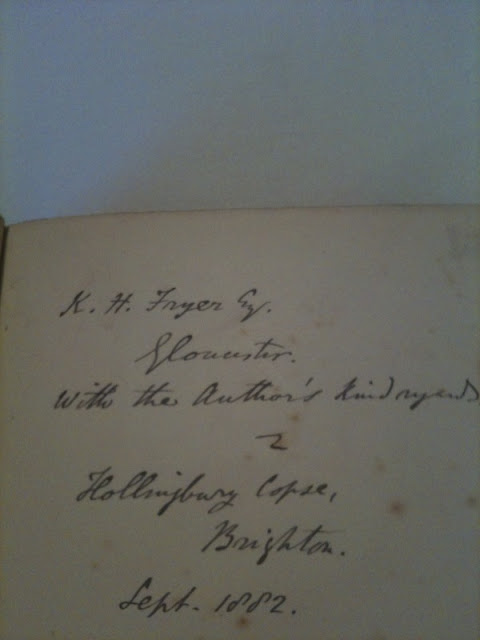 Chris acquired a second copy of this edition as well, but that copy was unsigned; however, it did have a bookplate that I found intriguing: 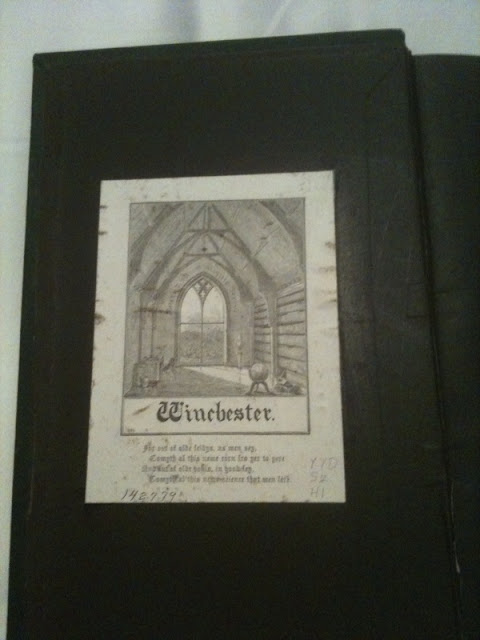 Here is the verse from the bookplate.  It's from Chaucer:

This book is a bibliographical curiosity, for the reason that in 1881 Mr Halliwell Phillipps printed it privately in an octavo volume of 192 pages, and within a year he has produced a second edition nearly four times as big, and now sells it for 7s 6d.  It is certainly one of the cheapest books ever published.
We do not propose to review the book as a life of Shakespeare because it is so full of matter, and contains so exhaustive a treatment of the information connected with its subject that we should need a whole number of our journal to do anything like justice to it, and moreover such a review would be more appropriate elsewhere.  We wish however to draw special attention to the mass of bibliographical information which it contains. Mr Halliwell Phillipps has for so many years made a practice of studying the literature of Shakespeare's time for illustrations of the poet's life and works that any book which he produces is sure to be full of bibliographical detail.  At p. 527 we find a series of copyright entries from 1593 (of Venus and Adonis) to 1623 (of the plays for the first folio).  An account of lifetime editions follows these, and then there is a full account of the first folio.
The volume is completed by the addition of a Documentary Appendix which contains particulars of all those documents that are important as giving us authentic information on the particulars of Shakespeare's life.  These number fifty in all, and range from the conveyance (dated 17th July 1550) by Robert Arden, Shakespeare's maternal grandfather, of a house and land at Snitterfield, in trust for his three daughters (this farm was then occupied by Richard Shakespeare the poet's own grandfather), to some anecdotes respecting Shakespeare written in 1693.
We have in this volume all those facts connected with the life of Shakespeare which are certainly known and we can find them kept apart from the conjectures so frequently hazarded in books of a similar character.


A review in the Sept 16, 1882 issue of The Academy echoed the same sentiments:

"This volumes deserves commendation for its uncommonly moderate price as well for its very valuable contents."

As for the 1882 edition of  Outlines of the Life of Shakespeare being a bibliographical curiosity because of the vast expansion of its pages, I am reminded of Thomas Frognall Dibdin's book, Bibliomania.  The 1809 edition was a mere 87 pages.  But the 1811 edition was a whopping 782 pages!

Writing the 1881 edition of Outlines of the Life of Shakespeare wasn't the first time Halliwell-Phillipps wrote about the Life of Shakespeare.  In 1848, he published a biography of Shakespeare which contained 336 pages:  The Life of William Shakespeare.  Including Many Particulars Respecting the Poet and His Family Never Before Published.    In 1853, he included a "Life of the Poet" in Vol 1 of the massive sixteen-volume edition of the Works of William Shakespeare, London, 1853-65.  Only 150 copies were printed of each volume.  The first volume alone was priced at 70 guineas.  The 1853 "Life of the Poet" was called by some Shakespeare scholars "an extension" of the 1848 Life, but it contained only 303 pages and that included the Preface and list of plates and woodcuts.   If he wanted to, however, Halliwell-Phillipps could have used the phrase "never before published" for the many editions of Outlines of the Life of Shakespeare.  From 1881 to his death in 1889, he consistently either added to or revised the contents of this work.  Here is a sampling of the record of editions of this work which were published during his lifetime:

In order to increase their monetary value, both Larizza copies are in need of minor repair by a professional bookbinder.  The cloth of the presentation copy is split on the top right side. Additionally, a previous owner's label needs to be removed from the top of the spine: 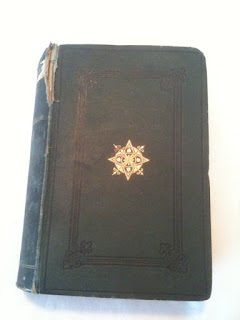 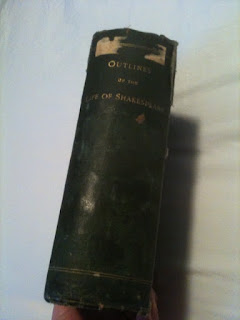 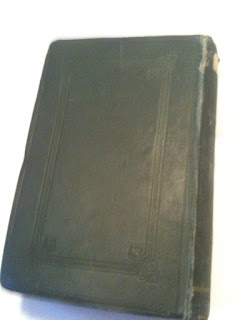 The cloth is frayed on the top of the spine of the second copy and is splitting along both sides of the spine. 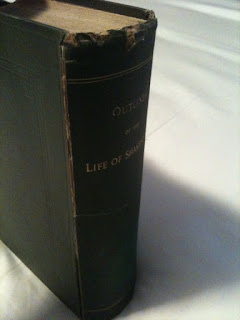 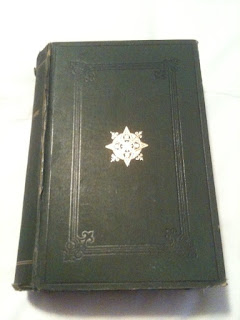 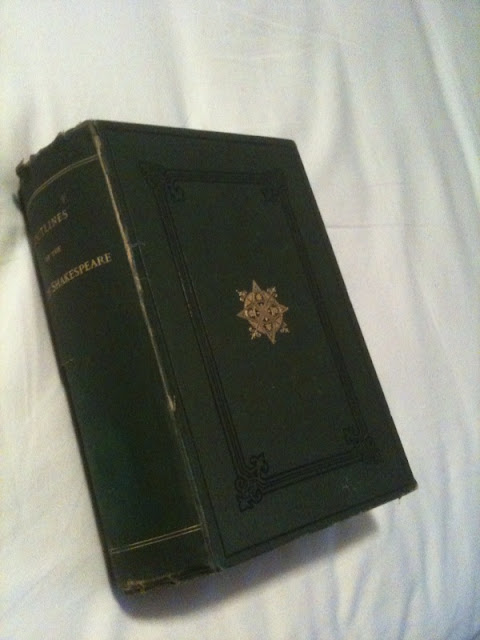 The color of both bindings is still bright and no other faults are evident.  I've already provided Chris with the name and number of a professional bookbinder in Connecticut.

After these copies are repaired, how much will the  Larizza copies be worth?  Exactly how much a buyer is willing to pay for them.  The monetary value of a presentation copy depends upon the scarcity of the work, the collectibility of the author, and the prominence of the person the book was presented to.  Obviously, the Larizza presentation copy is scarce because no other presentation copy of that edition is listed on the web.  There is an 1887 seventh edition listed by a UK bookseller for $193 that could be a presentation copy.

KHP Books in Vernon Hills, Il. has their 1887 copy listed for $350 with the only fault being that the spine of Volume 1 is weakened.  Several pieces of Shakespearian ephemera belonging to a former owner are included with the set.  The other 1887 edition is listed by Staniland Booksellers in Rutland, U.K.  This set was bound in richly decorated contemporary green morocco with raised bands and marbled boards by Henry Sotheran & Co., probably shortly after its first owner purchased it.  What is interesting is that in the listing it says that this copy is "inscribed by author on half-title," which makes me wonder if it is a presentation copy.  If so, I believe it is underpriced at a mere $192.  The only drawback would be the postage from the U.K. to the U.S.

I found five presentation copies of works written and inscribed by Halliwell-Phillipps.  And the Staniland copy of Outlines... was the most expensive.  One of them, Memoranda on the Tragedy of Hamlet, London, 1879 was only listed for $56.  That copy was presented to Sir Arthur Hodgson, an Australian politician.  I have a presentation copy of this work in my own library, but I believe the provenance of my copy increases its value. My copy was presented to  the author James Russell Lowell.  When I bought my copy six years ago, it was listed for $100.  Today I believe it would be closer to $150.

But how much are the Larizza copies worth?

The Larizza presentation copy of Outlines... was presented to F. H. Pryor, Mayor, Alderman, and Burgesses of the City of Gloucester.  Both Halliwell-Phillipps and Pryor were members of the British Archaeological Association.  I don't believe this provenance affects its monetary value.  I do believe either a university librarian or a Shakespeare collector will buy this presentation copy.  Once the copy is repaired, I believe it could fetch upwards of $500.

And now for the second copy with the bookplate and verse from Chaucer.  The book belonged to Caleb Thomas Winchester (1847-1920).  He was the librarian of Wesleyan University  at Middletown, Ct. from 1869 to 1885, and  Professor of Rhetoric and English Literature from 1873 to 1920.  He was the author of a biography of John Wesley as well as a number of articles and books on literature.

As for how much this copy will fetch, I will leave that up to Chris Larizza.  But I believe that provenance will play its part in determining monetary value.  Here is where I hope the Caleb T. Winchester copy goes: 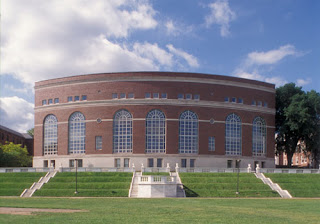 
What is the name of the library catalog at Wesleyan University?  Why Caleb, of course! The library has three of Winchester's books already.  Why not add a fourth?

In your opinion, what would an 1881 edition of Outlines of the Life of Shakespeare be worth? It was presented by the author to the mayor of Stratford-on-Avon, William Gardner Colbourne. The book is in great condition with minimal wearing around the edges, primarily on the corners.

I've seen no recent records of an 1881 association copy of this work, so I can't give you an estimate. How much is it worth? How much a buyer is willing to pay for it. Halliwell-Phillips doesn't appear to be too collectible at this time; Listings from six months ago and longer are still listed on the web. You might have better luck querying university libraries.

I was coming up with similar results but appreciate the second opinion. I will indeed follow up with university libraries Thank you for your time!