In February 2010, James Caudle, Associate Editor of the Yale Editions of the Private Papers of James Boswell, contacted me after reading my note in the September 2009 issue of the Johnsonian News Letter.  I had informed Johnsonians and Boswellians that we were cataloguing the libraries of Samuel Johnson and James Boswell on Library Thing.  James Caudle made our work more expansive, providing me with several catalogues and lists of books formerly owned by the Boswells.  One of them was a copy of the Catalogue of Greek & Latin Classics in the Auchinleck Library.

I recently completed the cataloguing of the 279 290* works listed in this catalogue. The listings can be viewed on Library Thing.  I invite Boswell lovers, and especially the people who catalogue books for a living to review my work, and inform me of any errors in my research so I can correct them.  I have yet to  modernize the latin place names or standardize the spelling of the names of the authors.

Of the 279 290* works listed in the 1810 Catalogue, at least 75 of the them were sold during the 1893 Auchinleck Sale.  Another five works were sold during the 1916 Sotheby Catalogue.  Auction lot numbers are annotated in the right-hand column, with "A" denoting the works sold in the 1893 Auchinleck Sale, and "S" denoting the works sold in the 1916 Sotheby Sale.

I am providing an annotated copy below of the 1810 Catalogue of Greek & Latin Classics in the Auchinleck Library for your research purposes.  The official sources for this document are: 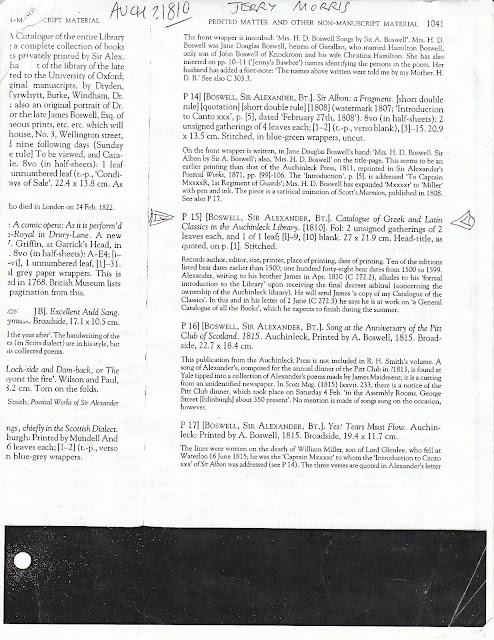 The 1810 Catalogue is nowhere near perfect.  Hardly any of the titles are provided. And some of the dates and places of publication are inaccurate–or at least they appear to be inaccurate.  Some of them could be, as James Caudle cautioned, "ghost editions." I've annotated my corrections in the catalogue below.  Please contact me if you believe any of my corrections are flawed. 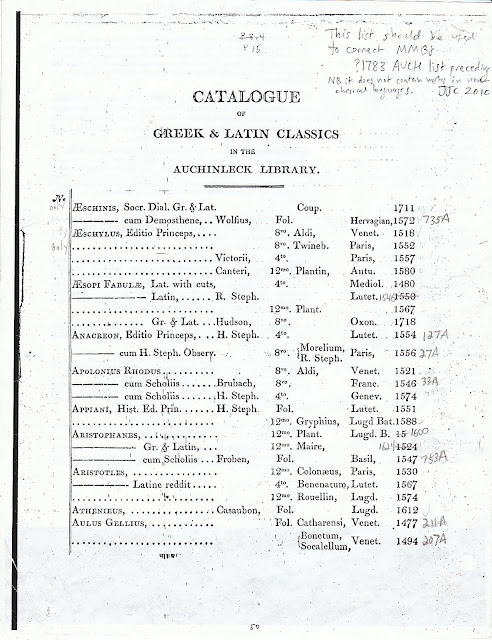 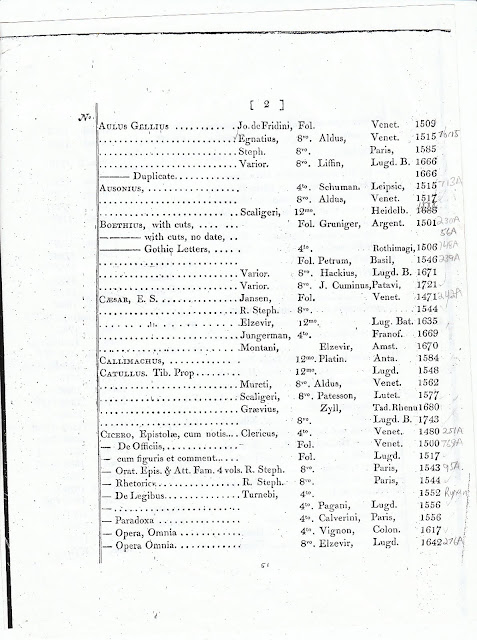 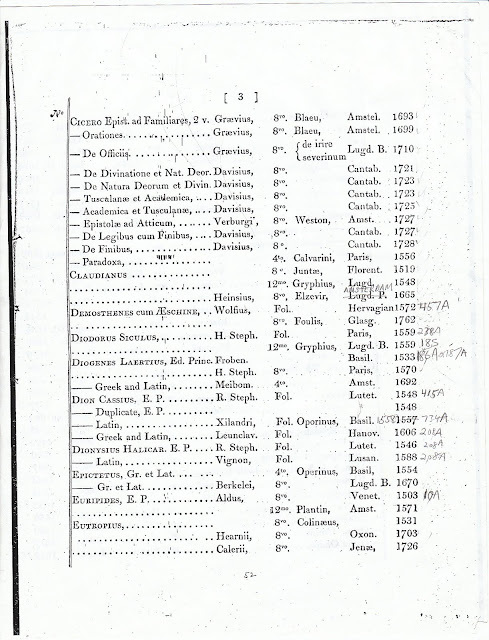 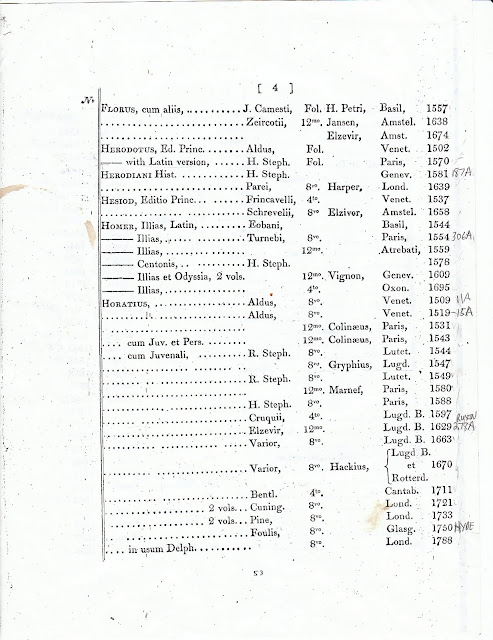 All bibliographical records on Page 4 appear to be correct. 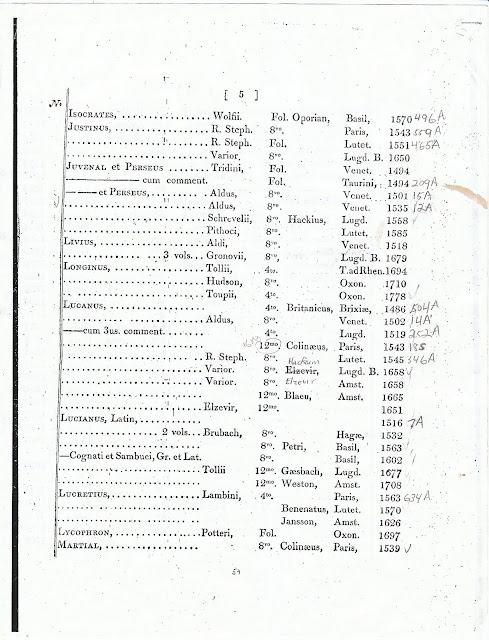 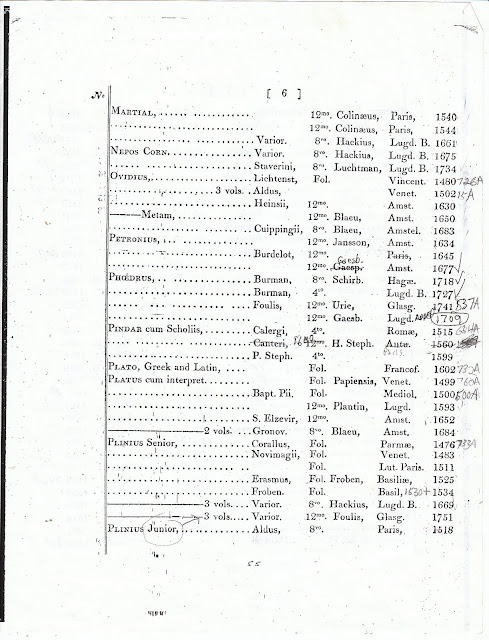 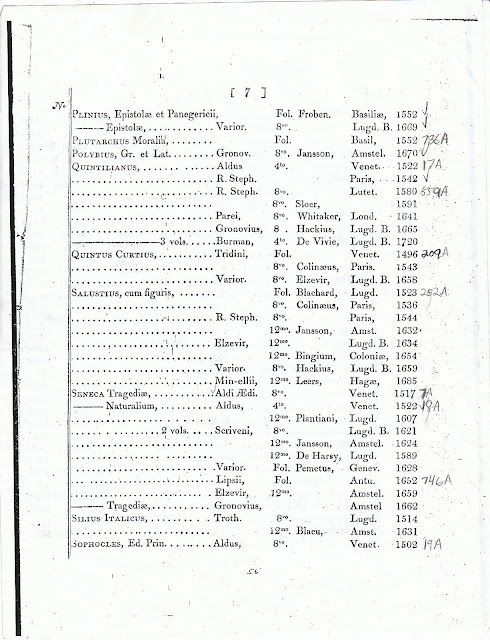 All bibliographical records on P7 appear to be correct. 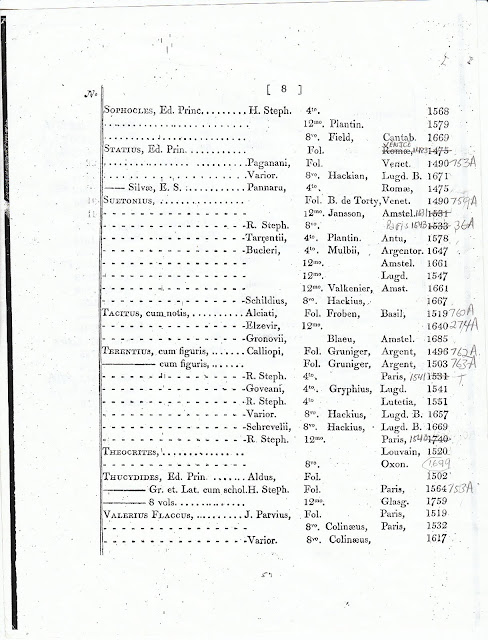 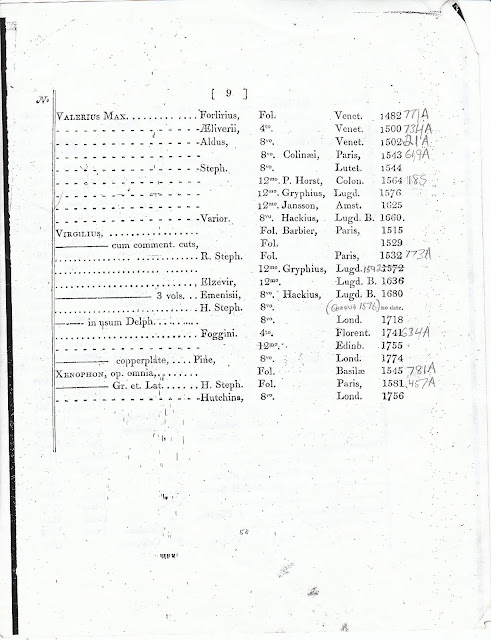 
Thanks again to James Caudle and Yale University for enabling us to catalogue another portion of the Boswell Library for viewing on Library Thing.

ADDENDA:
Jul 31, 2011:
My friend, Per Ralåmb,  Proprietor of Rosenlund Rare Books & Manuscripts in New Jersey, and a collector of early printed books reviewed my corrections, using three bibliographies I was unfamiliar with:  Schweiger, Renouard, and Brueggeman.  His research recorded below is already included in the respective Library Thing listings.

P1 Aesop  Latin R. Stephanus 1550. This is should be, as you indicated, the 1546 edition in 4to though it was printed in Greek and not Latin. The only 1550 Latin edition was printed in Basel.

P1 Arsitophanes Maire 1524. This is the Scaliger edition of 1624. By the way, in order for this edition to be complete, it must contain the 56p of the Fragments which is sometimes missing.

P2 Ausonius Scaligeri Heidelb 1688. This is correct. Should be the 1588 Heidelberg edition.

P5 Lucanus Elzevir Lugd B. 1658  The Hackius edition was printed in Leyden and the Elzevier in Amsterdam.

P8 Terentius R. Steph. Paris 1740. There is no Estienne Paris edition of 1540 according to Renouard. So, this should be the Estienne 12mo edition of 1541. Schweiger is a bit unclear, but seems to follow the same flow of editions.


*Update: June 2013 After reviewing Terry Seymour's article in the March 2013 issue of the Johnsonian News Letter, I discovered that I hadn't cataloged all the entries listed in the 1810 Catalogue. Moreover, where there were duplicate copies of a work, only one work was counted by Library Thing toward the total count of the works. I listed all duplicate works separately and identified and catalogued the entries I had missed in 2011.

Many thanks for this useful posting,