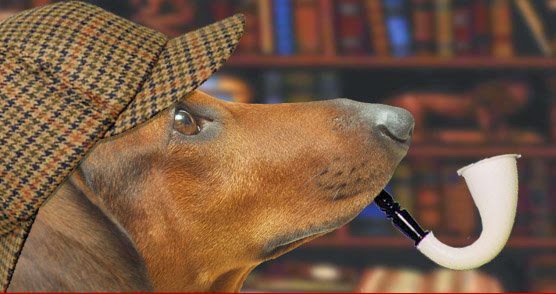 
I love researching the provenance of my books.  And I'm usually researching the names of the former owners of my books.  But in the case of The Wish,  I already knew the name of the former owner:  Charles Shackleton.  What I did not know was the name of the person who had given Shackleton the book.  This person signed "his name" on the front free endpaper. 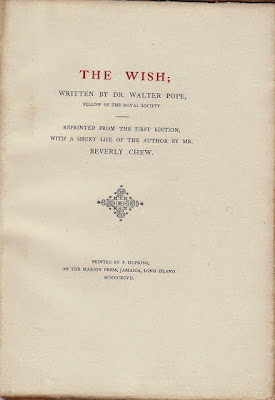 I knew even before I bought it that it would be a challenge to identify this person.  I just didn't realize how much of a challenge! 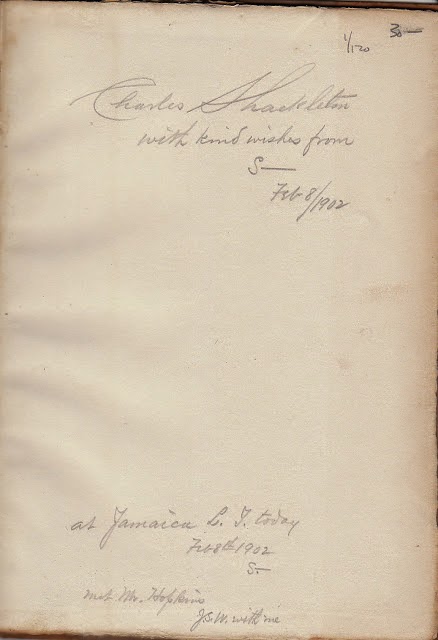 I had four reasons for buying this particular book:


It was published in Jamaica, New York, which is where I grew up

I acquired it in June 2011 during my first and only visit to Booked Up in Archer City, Texas, Larry McMurtry's town of books, at the time, America's answer to Hay-on-Wye.

The book included a short life of the author, written by the New York bibliophile, Beverley Chew (1850-1924). And I wanted something written by Chew in my library.

I researched my books about book collectors and searched the web endlessly, looking for a bookman who signed his name as S—.   Finally, on June 28, 2011, I queried the EXLIBRIS-L mailing list, an elite group of librarians, booksellers and book collectors, for assistance.  The renowned bookseller, the Americanist, Norman Kane,  responded:


. . . Be that as it may, although I have peered at many an inscribed Marion Press book, I do not recognize "S". Having previously been the head of the fine press division of De Vinne's shop, Hopkins had a large following among the book collectors of his day, and the possible suspects may be numerous. Norman


Norman Kane, who passed away last year at the age of 88,  had bought the remaining Marion Press stock from the estate of Hopkins' son-in-law, and "subsequently sold a ton of books to Larry [McMurtry]."    My copy of The Wish, however, was not part of the remaining Marion Press stock that went to Texas.   S—  had given my copy to Shackleton back in 1902.

The Wish was one of ten books I bought in Texas in June 2011.   I made mention of it and my research of S— in my blog post for that month:  Ten Books From Texas And Two Reminiscences.  And  then I put my research of S— on the back burner.

But it didn't stay there for long.

I was poring over my books in August 2013, selecting choice passages for that month's blog post, Elegant Extracts About Books, Booklovers, And Libraries.   And when I opened my copy of A Shelf In My Bookcase, by Alexander Smith,  and looked at the front free endpaper, I had a sense of déjà vu. 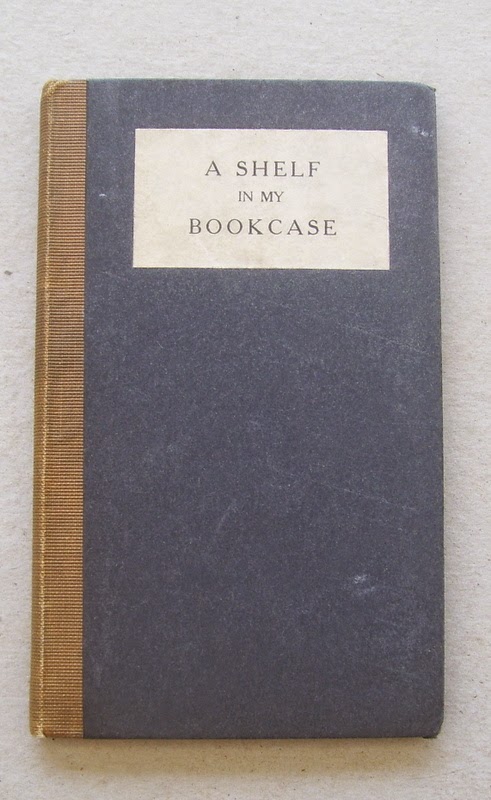 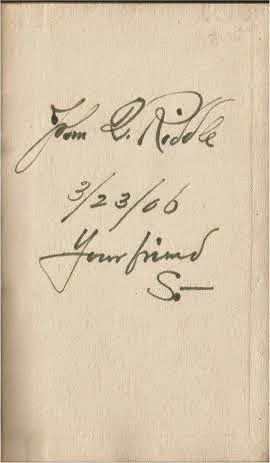 S— added a period to his name. 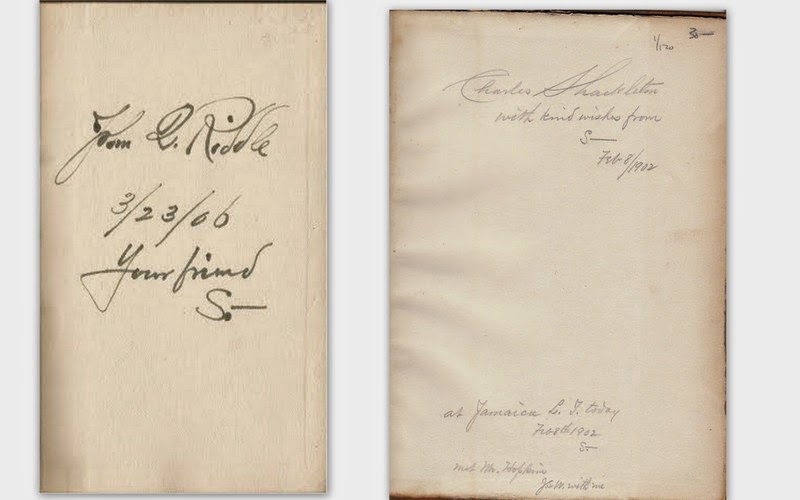 But the handwriting was the same.

I was able to narrow the list of "possible suspects" down to three:  Edward Tracy Scovill (joined 1894), Andrew Squire (1893) and Ambrose Swasey (1896).  Yet, I could find no evidence that any of the three signed his name as S—.

Ambrose Swasey was no stranger to me.  I have his signed copies of the Transactions of the Grolier Club in my own library. 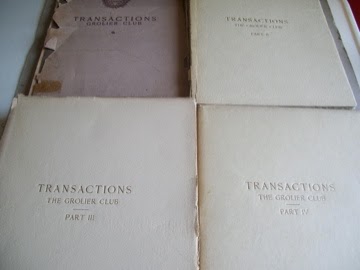 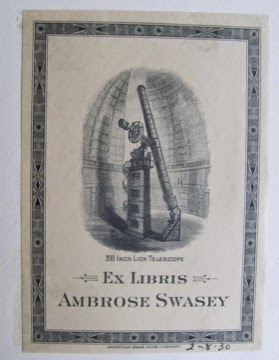 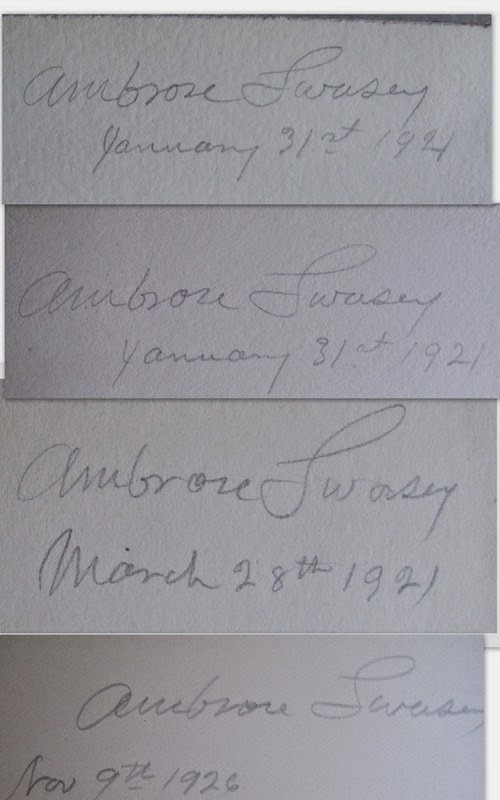 When I looked at Swasey's "J" and "S,"  they were significantly different than the "J" and "S" inscribed by S—.   Ambrose Swasey was not the bookman who signed his name as S—.

I then queried the Rowfant Club, hoping they could match my inscriptions to writing samples from the early 1900s in their archives.  But that lead didn't pan out.

I then checked the early Caxton Club members list to see if S— was a member of that club.  And in the 1897 Caxton Club Annual Report and Members List, I found this glorious name listed three times:

S. Clifford Payson  originally from New York, moved to Chicago in 1886 and started working for the railroad in 1904.  He became a member of the Caxton Club in 1895.  When he gave Shackleton a copy of The Wish, he was a non-resident member of  the Grolier Club, listed under his full name, Samuel Clifford Payson.  Except for the possibility that he may have played tour guide for Shackleton in New York in 1902, I could find no connection between him and either Charles Shackleton or John Q. Riddle.

I then queried a friend in the Caxton Club, hoping the Club archives had a sample of S. Clifford Payson's handwriting to compare.   And when that lead didn't pan out either,   I put my research of S— on the back burner again.  But I could now see a light at the end of the tunnel.

Fast forward to May 2014.  I was almost certain that S. Clifford Payson was the person who signed his name as S—.  All I had to do to prove it was to to find a connection between Payson and either Shackleton or Riddle.

There are 20 early year books of the Rowfant Club available for full viewing online at the Hathi Trust Digital Library website.  And the names, S. Clifford Payson, Samuel Clifford Payson, or S. C. Payson  are not listed in any of these year books. 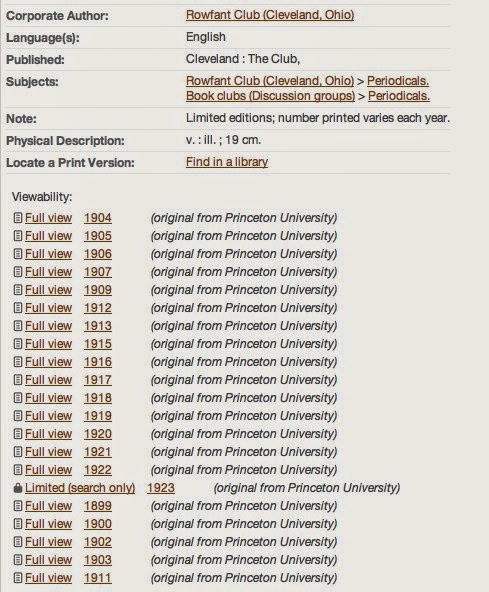 But the earliest year book listed on the Hathi Trust website is from 1899.  The Rowfant Club, however, was founded in 1892.   Was it possible that S. Clifford Payson became a member of the Rowfant Club before 1899 and then quit?  Highly unlikely.  But not impossible.

I searched Google Books for "Rowfant Club" and "Payson."  And the first two results provided online access to the Rowfant Club 1898 Year Book: 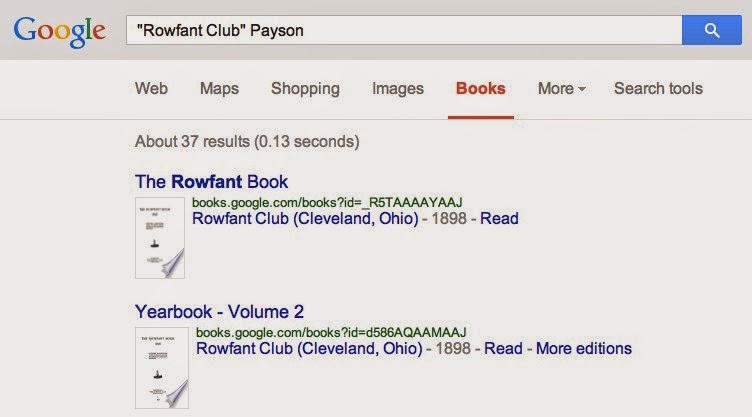 And in the list of non-resident members for 1898, there was this glorious name:

And then I found The Connection!

Charles Shackleton and S. C. Payson were elected together as Club members in 1898!


There was another Payson who was elected a member of the Rowfant Club in 1898; the same time that S. C. Payson was elected: George Shipman Payson.  His name, however, was mispelled in the 1898 Year Book,  first as "Payson, George S. Lipman," and then as "G. S. L. Payson."

I believe George Shipman Payson  (1862-1943), born and raised in Chicago, was S. Clifford Payson's cousin, and his sponsor in both the book world and the business world.

George S. Payson was a founding member of the Caxton Club (S. Clifford Payson joined the Caxton Club shortly after the club was formed in 1895).  Christopher de Hamel, in his June 2005 Caxtonian article, "Single Leaves," credits George Payson with suggesting the club be named after William Caxton.

Also in 1895, both S. C. Payson and G. S. Payson were elected as American Candidate Members of the Bibliographical Society in Great Britain.

George S. Payson was a Yale University graduate, and a lawyer who became General Counsel for the Western Railroad Association in January, 1894.  His father, George Payson (1824-1893),  held that very position  for almost 20 years until his death from pneumonia on Dec. 1, 1893.

I believe George S. Payson used his considerable influence to help his cousin, S. Clifford Payson,  obtain a job as a freight agent for the railroad in Chicago in 1904.

S. Clifford Payson made a name for himself in the book world and later in the railroad world.  He was listed  in the 1897 edition of the List of Private Libraries: 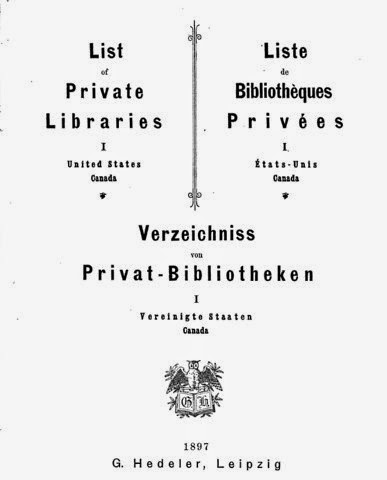 The books S. Clifford Payson gave to Shackleton and Riddle were books printed by private presses.  The Marion Press reprinted The Wish, which was first published in 1693 and was a favorite of Ben Franklin.  The Torch Press privately printed A Shelf in My Book Case, an essay from Dreamthorp:  A Book of Essays Written in the Country, first published in 1863.  Dreamthorp was a favorite of A. Edward Newton and Christopher Morley.  The bookseller's ticket of The Burrows Brothers Company, Cleveland is pasted on the rear pastedown of A Shelf in My Book Case.  And I wonder if Payson bought  it there while on his way to visit Riddle in 1906?  S. Clifford Payson's job as a freight agent could have reunited his friendship with Riddle, who was vice-president of the hugely successful and nationally known Lockwood Taylor Hardware Company of Cleveland.  I also wonder if S. Clifford Payson discussed his Cruikshank Collection with Charles Shackleton, an artist, himself?

In 1893, the bibliophile, Eugene Field, mentioned "his Chicago friend, S. C. Payson" in the Introduction to Herbert S. Stone's First Editions of American Authors.  And The Book-Lover reprinted the Introduction, titled, "Ad Lectorem," in its entirety in its Autumn 1899 issue: 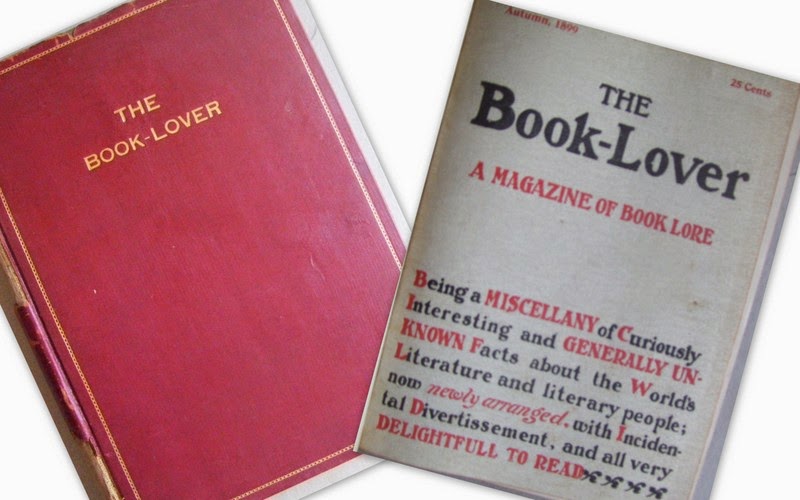 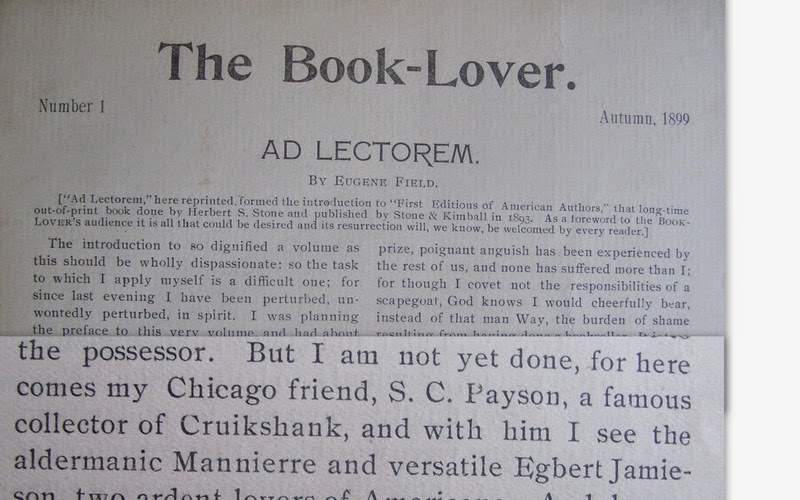 And in 1897, S. Clifford Payson was one of the exhibitors of Nineteenth-Century Bookbindings: 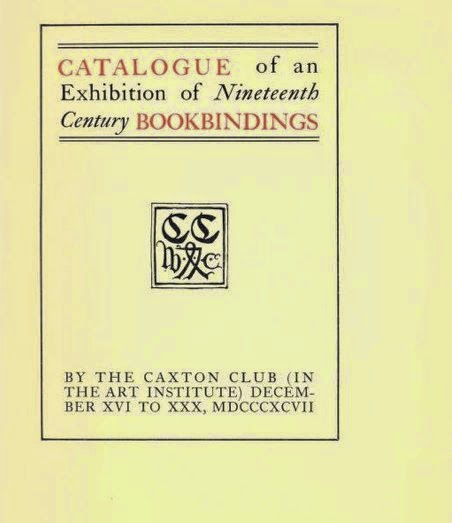 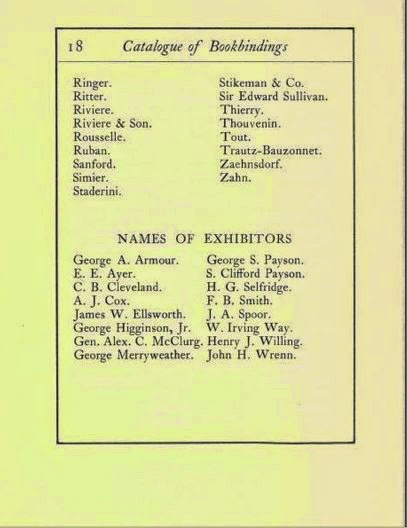 When S. Clifford Payson started working for the railroad in 1904, he decided to make the railroad his whole life.  And, surprisingly, book collecting was not part of it.

S— resigned his Caxton Club membership as early as 1901.  And he resigned from the Grolier Club in April 1904.  He contacted the London firm of Sotheby, Wilkinson & Hodge, and in November 1904, the auction house sold the books he had put up for auction: 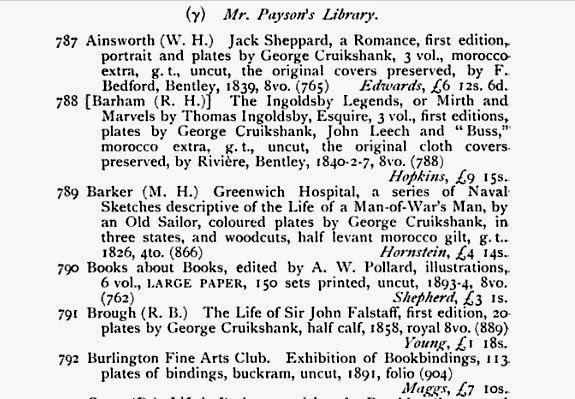 When the person who signed his name as S— sold his library in 1904, he no longer considered himself to be a bibliophile.   The only book-related event afterwards was when he gave his friend, John Q. Riddle, a book in March, 1906.

There is no mention of books or book collecting in any of his later bios  or notes about him that I found on the web.


Who's Who in the Pacific Southwest 1913 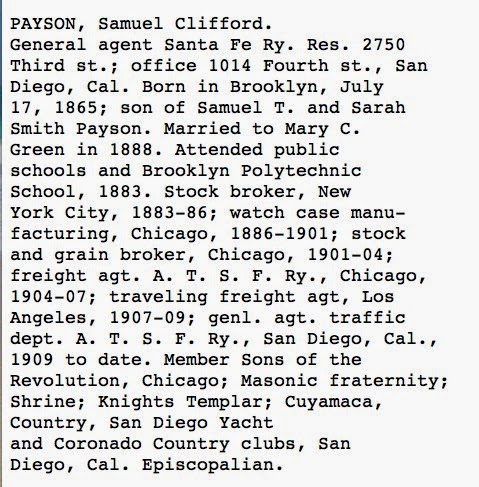 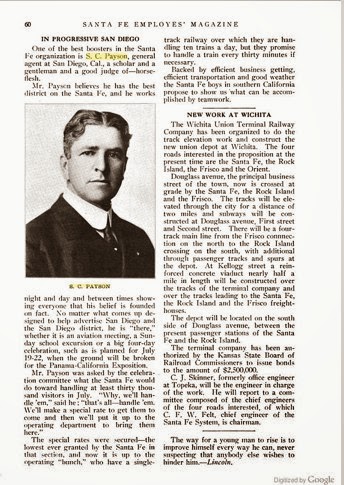 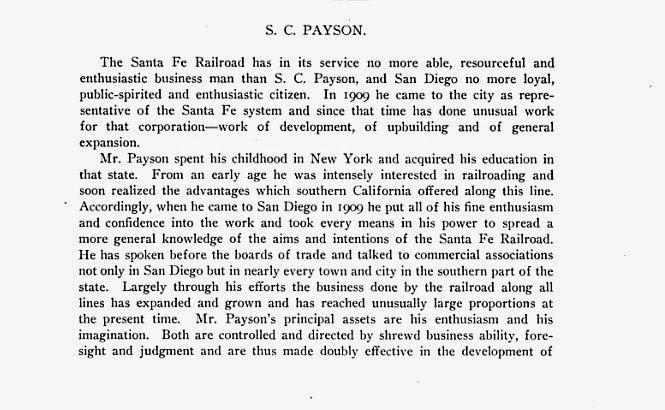 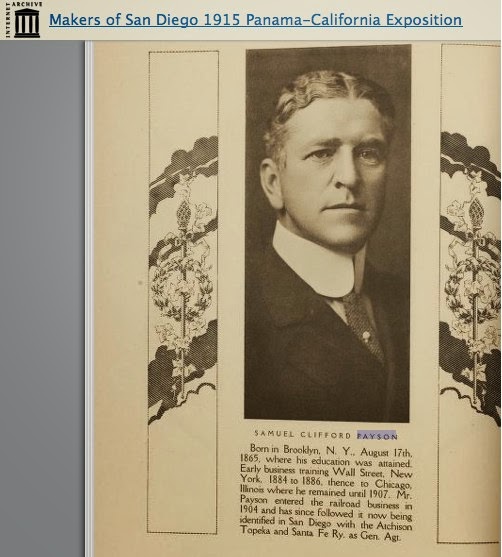 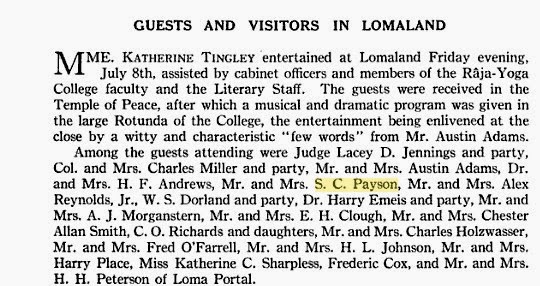 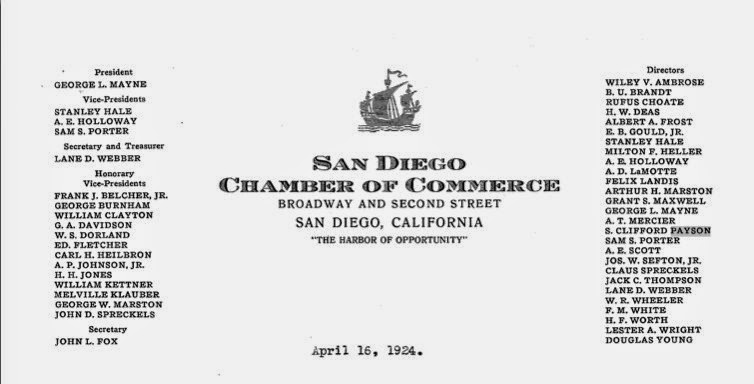 And so ends the biblio-sleuthing of the person who signed his name as S—.

I thank my friend Asta for finding the image of the pet detective.  And I thank the people at GetMyCat.com for allowing me to use the image from their website.