A Well-Lobbied Government:
How the NRA Won the Battle Over the Second Amendment

On April 17, 2013, the Senate failed to pass a bipartisan bill to expand background checks for new gun owners. There were 54 yeas and 46 nays. But 60 votes were required to pass the bill.

Why did the bill fail to pass? Because Senators were more afraid of the NRA than they were of the parents of the Newtown Dead. Why does the right to bear arms trump the dire need for some sort of gun control? And how did the NRA get so powerful?

If you believe the hype from the NRA, any gun control measure infringes on their individual right to bear arms, a right the Founding Fathers "supposedly" gave them over 200 years ago, a right commonly known as the Second Amendment.


A well regulated militia, being necessary to the security of a free state, the right of the people to keep and bear arms, SHALL NOT BE INFRINGED.


The NRA wasn't always the fanatical political organization it has become. It was founded in 1871 because some of the officers in the Civil War were unhappy with the marksmanship of their troops. And so the former officers formed the National Rifle Association, and members went to the rifle range to improve their accuracy. Here is an image of the NRA's first rifle range: 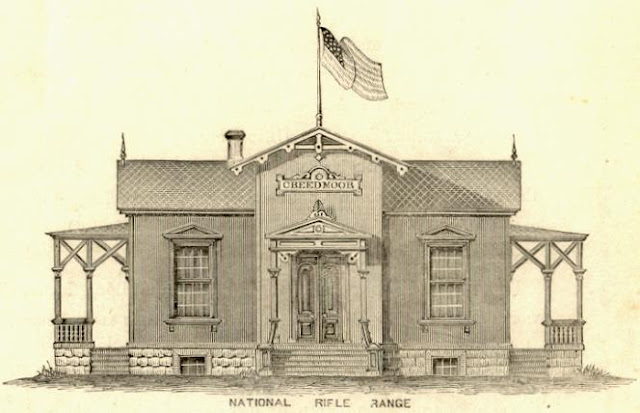 Yes. Creedmoor Psychiatric Center now stands on what was once the rifle range of the NRA. I attach no historical significance to this fact other than to say that the leaders of the NRA are crazy like a fox.

In order to learn more about the Second Amendment, gun control, and the NRA, I read A Well-Regulated Militia: The Founding Fathers and the Origins of Gun Control by the historian Saul Cornell. 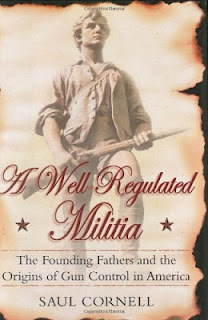 The book was an eye-opener. Saul Cornell notes the conflicting interpretations of the meaning of the Second Amendment: the individual rights model, which first appeared after the first gun control measures in the Jacksonian era, and the collective rights (militia) model, which appeared during the Reconstruction era after the Civil War. Both models, he says, are wrong. He reasons that when the Second Amendment was written, it was a civic model containing both a right and a responsibility. The Second Amendment protected the individual's right to keep and bear arms necessary to meet his militia obligations. This civic responsibility to bear arms basically ended when the National Guard was created in the early 1900s. Which begs the question. If there no longer was a civic responsibility to bear arms, wouldn't that have made the Second Amendment moot, much like the Thirteenth Amendment made the Fugitive Slave Clause of the Constitution moot?

Cornell notes that throughout history gun violence precipitated gun control, which further incited gun owners. The NRA didn't jump into the political arena until 1911, in response to the gun control measures of the Sullivan Law, which was precipitated by a murder-suicide near Gramercy Park in New York. Cornell pinpoints the current militant form of the NRA as a response to the Gun Control Act of 1968, which was precipitated by the assassinations of Robert F. Kennedy and Martin Luther King. At the time Saul Cornell's book was written in 2006, the grassroots efforts of the NRA and other gun-rights organizations had won everywhere except in the courts.

The U. S. Supreme Court did not directly address the Second Amendment issue until 1876. In U.S. v Cruikshank, the Supreme Court asserted


in unambiguous terms that 'bearing arms for lawful purposes' was not identical to the right protected by the Second Amendment that linked bearing arms to participation in a well-regulated militia. In essence, the Court argued that the common law right to keep and carry arms and the right to bear arms protected by the Second Amendment were legally distinct. The Second Amendment in their view was one of the amendments that has no other effect than to restrict the powers of the national government. The purpose of the amendment was to guard the state militias against the danger of federal disarmament (Cornell, 194, 195).

In 2006, when A Well-Regulated Militia: The Founding Fathers and the Origins of Gun Control was published, Miller was still the law of the land. Under the Second Amendment, the right to bear arms was still a collective right that pertained solely to the preservation and efficiency of a well-trained militia. But the author Saul Cornell, well aware of the gains of gun rights advocates, saw the handwriting on the wall, and realized that Miller would soon be revisited.

Saul Cornell noted that gun rights advocates in the legal academic community, monetarily supported by the NRA and other gun lobbies, "began churning out at an astonishing rate law review articles that supported the individual rights view of the Second Amendment (Cornell, 206)." In essence, this new modern interpretation, called the " Standard Model" of the Second Amendment, redefined what our Founding Fathers "really meant to say" when they wrote these words over two hundred years ago:

A well regulated militia, being necessary to the security of a free state, the right of the people to keep and bear arms, shall not be infringed.


Indeed, numerous law reviews, both pro and con, are noted throughout Cornell's book, many of which can be viewed online.

The flaws in the Standard Model are emblematic of deeper problems in the way history has been used by constitutional scholars. Partisans of the Standard Model have not only read constitutional texts in an anachronistic fashion, but have also ignored important historical sources vital to understanding what Federalists and Anti-Federalists might have meant by the right to bear arms. The structure of legal scholarship has served to spread these errors rather than to contain them. Once published, these errors enter the canons of legal scholarship and are continuously recycled in article after article. Upon closer inspection, the new orthodoxy on the Second Amendment shares little with the Standard Model employed by physicists. Indeed, recent writing on the Second Amendment more closely resembles the intellectual equivalent of a check kiting scheme than it does solidly researched history.


But one of the law reviews on the Standard Model, and an exceptional one at that, "The Commonplace Second Amendment" was written be Eugene Volokh, who was law clerk for Justice Sandra Day O'Connor of the Supreme Court prior to joining the UCLA law school. Justice Scalia was to cite Volokh's paper in his majority opinion in Heller in June 2008.

When George W. Bush was running for President in 2000, the NRA bragged that they would work out of his office; however, Bush said that he would be his own man. When Bush was elected, he appointed John Ashcroft as Attorney General of the United States. And the NRA worked out of Ashcroft's office instead.

May 17, 2001: Ashcroft writes to the NRA on DOJ letterhead, stating he supports the individual right to bear arms (from the Northern Kentucky Law Review): 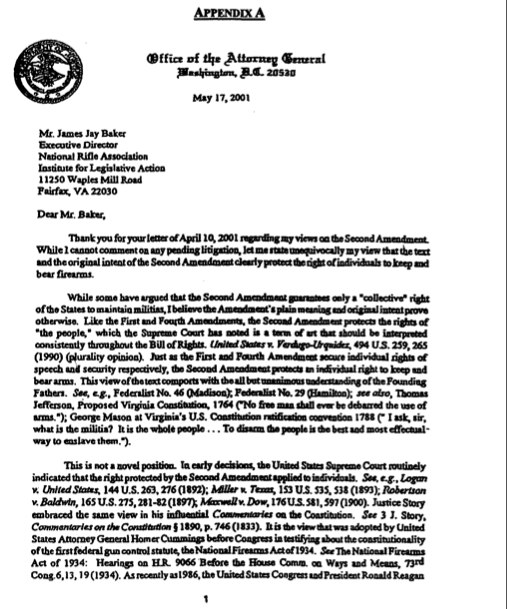 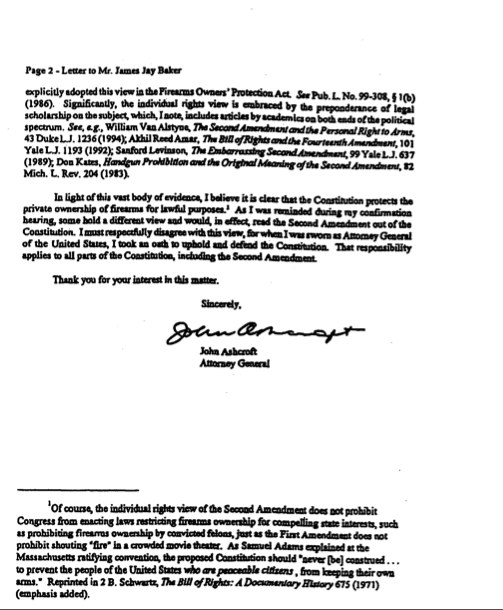 Dec 2001, Ashcroft bars the use of gun checks in terror inquiries after 9/11.

May 2002 Solicitor General Olson notifies the Supreme Court that "it was now the policy of the Justice Department that the Second Amendment gives individuals the right to keep and bear arms."

May 2002: Since Ashcroft and the Justice Department vocally supported the individual right to bear arms, it didn't surprise me that the Fifth Circuit Court of Appeals agreed with the lower court in Emerson that individuals have the Second Amendment individual right to bear arms. But the Court still ruled that the Texas gun control law did not violate the Constitution. What was disturbing to Cornell was that the Judges referred to law reviews concerning the Standard Model of the Constitution in their decision.

While Saul Cornell's book was being published, the landmark Second Amendment case, District of Columbia v. Heller was slowly working its way through the courts. Because of its high crime rate, the District of Columbia passed The Firearms Control Regulations Act of 1975:

From Wikipedia, the free encyclopedia
The Firearms Control Regulations Act of 1975 was passed by the District of Columbia city council on September 24, 1976.[1]On June 26, 2008, in the historic case of District of Columbia v. Heller, the Supreme Court of the United States determined that the ban and trigger lock provision violate the Second Amendment. The law banned residents from owning handguns, automatic firearms, or high-capacity semi-automatic firearms, as well as prohibited possession of unregistered firearms. Exceptions to the ban were allowed for police officers and guns registered before 1976. The law also required firearms kept in the home to be "unloaded, disassembled, or bound by a trigger lock or similar device";[2] this was deemed to be a prohibition on the use of firearms for self-defense in the home.
And here is Justice Scalia's 5-4 majority opinion in Heller where the majority, in referring to the Standard Model of the Second Amendment, overturned 200 years of constitutional precedent, and ruled that, under the Second Amendment, our Founding Fathers gave individuals the right to bear arms. A right the NRA believes stronger than ever, SHALL NOT BE INFRINGED.

In closing I will refer to part of an address that Justice Scalia delivered in September 1988:

Let me turn next to originalism, which is also not without its warts. Its greatest defect, in my view, is the difficulty of applying it correctly. ... But what is true is that it is often exceedingly difficult to plumb the original understanding of an ancient text. Properly done, the task requires the consideration of an enormous mass of material–in the case of the Constitution and its Amendments, for example, to mention only one element, the records of the ratifying debates in all the states. Even beyond that, it requires an evaluation of the reliability of that material–many of the reports of the ratifying debates, for example, are thought to be quite unreliable. And further still, it requires immersing oneself in the political and intellectual atmosphere of the time–somehow placing out of mind knowledge that we have which an earlier age did not, and putting on beliefs, attitudes, philosophies, prejudices and loyalties that are not those of our day. It is, in short, a task sometimes better suited to the historian than the lawyer. ...

Actually, under federal law all able-bodied male citizens between the ages of 17 and 45 who are not members of the National Guard are members of the unorganized militia. See 10 U.S.C. s 311.

So even under Prof. Cornell's theory, we'd all have an individual right to bear arms because we're all members of the militia.

Here's a different interpretation of what the phrase, unorganized militia means.

Cornell is an excellent book - I've read it as well, after the author of the link you posted gave me a copy. In fact, he has compiled an excellent reading list on the topic.