The Boswell Copy of Piozzi's Anecdotes of Dr. Johnson?

NOTE:
This blog was originally posted on my "Bibliophiles in My Library" blog on 03/12/2010.  I am transferring it to my "Biblio Researching" blog because the subject matter of the blog post more properly applies to this blog. 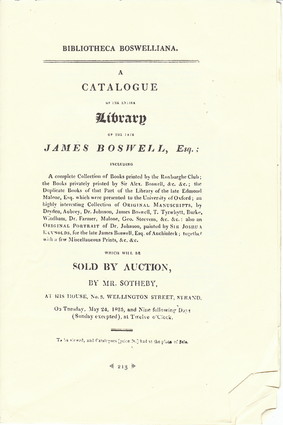 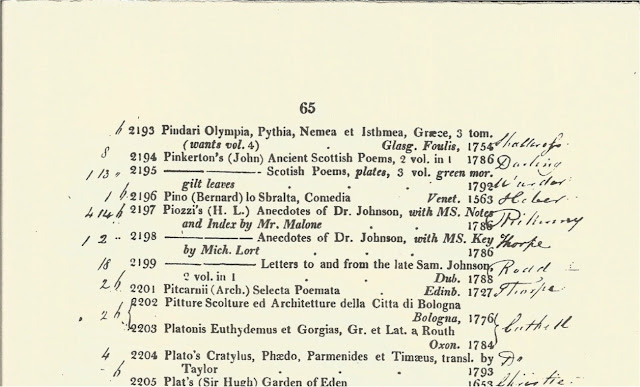 Most likely,  this is the copy in the Hyde Collection at Harvard.  However, there is no provenance evidence in the book to conclusively prove that one of the Boswells owned this copy.

In 1786, the author, Mrs. Hester Piozzi, presented  this copy of the book to Michael Lort.  When Lort died in 1791, the book was listed in lot number 2913 of the auction catalogue of his library. 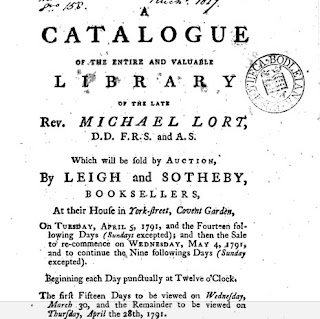 It was afterwards in the library of James Bindley.  He had another copy of this work as well.   Both copies were listed in the catalogue of his library. I  believe that one of the Boswells, either James Boswell the Younger or Sir Alexander Boswell acquired this copy shortly after the auction in 1818.

NOTE:  Terry Seymour, author and fellow Boswell enthusiast, has provided conclusive proof that James Boswell the Younger purchased books at the Bindley sale.  He brought  to my attention Boswell's note in lot 1262 of the 1825 Boswell auction catalogue, referring to a book by Stephen Hawes: "I bought this volume at Mr. Bindley's sale, Jan. 21, 1819 for Forty Guineas, &c. from my affectionate remembrance of its last two possessors, Mr. Bindley and Mr. Malone."

This copy was bought by the bookseller Thomas Thorpe at the auction of the Boswell Library in 1825.

This copy next appears as lot 325 of the catalogue of the sale of the Library of Miss Prudentia Lonsdale in 1897:

The Sale of the Library of Miss Prudentia Lonsdale

325. Johnson (Dr.). Anecdotes Of The Late Samuel Johnson, LL.D., during the last twenty years of his life, by Hester Lynch Piozzi. First edition. Original boards, uncut. 8vo. 1786. Pearson, £5   With the following inscription : " The gift of the Author to M. Lort, March 25, 1786." It also contains the autograph of James Bindley and T. Jeff". Hogg, as well as several contemporary cuttings relating to Dr. Johnson.

The bookseller, B.F. Stevens, acquired this copy from Pearson and listed it for £9 in a bookseller catalogue, which was reprinted in the 1901 edition of Book-Prices Current.  In his listing, Stevens noted that Mrs. Piozzi had given this copy to Michael Lort, and that the copy was afterwards in the Bindley and Boswell collections.  Stevens mentioned that Lort inserted a long manuscript key.  Stevens also asserted that Lort, Bindley, and Boswell "added important additions and corrections to the text of the volume." R.B. Adam, the Johnsonian collector from Buffalo, New York, was the next owner of this copy of the book most likely acquiring it from Stevens.  Adam listed the Lort copy in his catalogue, The Catalogue of the Johnsonian Collection of R.B. Adam, Buffalo, 1921.


Here is a copy of the listing in the Hollis Catalog at Harvard:

Here is the listing of this copy in the catalogue of the library of James Boswell on Library Thing.